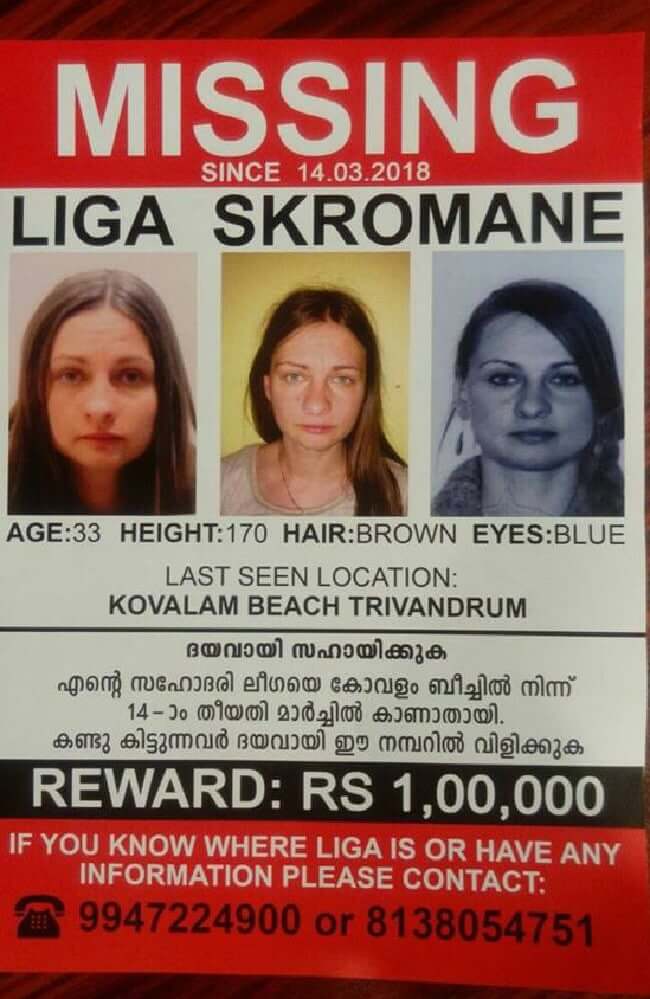 Kerala Police have finally caught the two men who drugged, raped and beheaded a tourist – Liga Skromane from Latvia.

Liga had been missing since February when she went to visit a beach in Kovalam. She had come to India in search of ancient Indian Ayurvedic (natural Indian healing) treatment for depression.

The suspects are drug sellers, and one has previously abused both men and women in the same remote area in the post.

Simply put, Liga trusted the wrong people. In tourist areas in India, it’s hard to know who you can trust. Most of the time, if someone is approaching you and starting a conversation, there’s something they want from you. It might just be a selfie or to sell you something, but it could be something else too.

As a man in India the risk is less, but as a lone woman being approached and going anywhere with local men is risky. They might come up to you and start with innocent questions like, “Where are you from?” Then once they’ve built a quick friendship with you, they’ll say, “Let me show you somewhere special that tourists never go.” Who wants to miss out on seeing a local sight off the beaten track?

Another thought I had which is pure hypothetical is that she may have been buying drugs. In places like Goa and Kerala, I was offered drugs from men on the street as I walked down the road or near a beach. I don’t do drugs or drink, so I never experienced what that process is like. But I imagine they’d have their lines to lure you to a quiet place to take drugs. Just like back home, you can’t trust drug dealers (but that should go without saying right?)

A final problem in India is that foreign women are seen as “easy” and thought to be more open to having sex than Indian women. So if you come across a man who has this mentality, he’ll take advantage of you all the while thinking to himself, “She asked for it, she’s out here talking to men!”

How to stay safe with strangers

Before trusting and going anywhere with people in India, there are a few things you can do to help protect yourself:

Karl Rock, is a Hindi speaking Kiwi ex-pat who take viewers behind the scenes of incredible India and its neighbours. He has visited every state and union territory in India, and its culturally similar neighbours – Pakistan and Bangladesh, and aims to make others fall in love with India and the subcontinent.

Very good article,
As a traveller safety is first and informing people about situations in certain places is really good.
We had fought various Evils previously, and we ll fight this evil and many more that harm humanity. We have to do this as soon as possible before its too late.

What you could expect from islamist and communist ruled state??kerala is only state from where muslim join isis in india……….and only state to name a street after isis as daesh road

just blame it on muslims..what is your evidence the killers are muslims?

This sort of action can happen anywhere with any gender or race. In fact it does happen every where and these tip would be good in any country or society.

Where’s your hidden gem in New Zealand?
Namaste & Kia Ora New Zealand! What should we do next?
Why are Indians being attacked in New Zealand?
What else is different in the U.S?
Is the air in India always like you see on TV?
Would you try Burger King India’s goat meat Whopper?
How would you describe India to a foreigner?
Americans are queuing for Indian… would you?
Loading Comments...